Breaking Down Silos and Building Up Quality Systems: The Deming Effect

This article will attempt to tackle the age old problem of breaking down silos in industry, government, and education and building up quality systems that produce winning scenarios for all involved, using the principles that Deming famously created, by replacing systems of competition within organisations to those of co-operation.Silos are a barrier to improvement and organisational development that are caused by the prevailing style of management and the unintended consequences it has produced.

This style of management is based on hierarchy and command and control.

Where did it originate?

Peter Scholtes said in The Leader’s Handbook that it came from a train wreck in 1841. 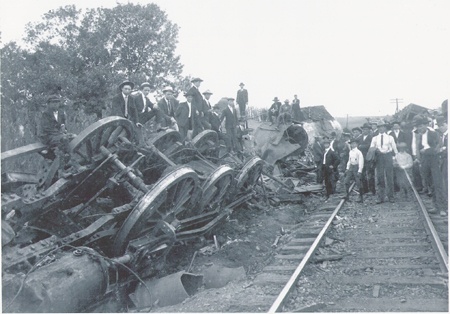 On October 5, 1841, two Western Railroad passenger trains collided head-on somewhere between Worcester, Massachusetts and Albany, New York.  The Massachusetts legislature launched an investigation into the causes of the train wreck and the directors of the Western Railroad appointed a committee headed by Major George W. Whistler to find a remedy.

While the standard organisational chart may seem ageless, it was, in fact, adapted from the Prussian Army and introduced to American business practice as a way to prevent train wrecks! In its time, it was revolutionary.  Its unique features are:

The organisational chart for this style of management looks like the figure below: 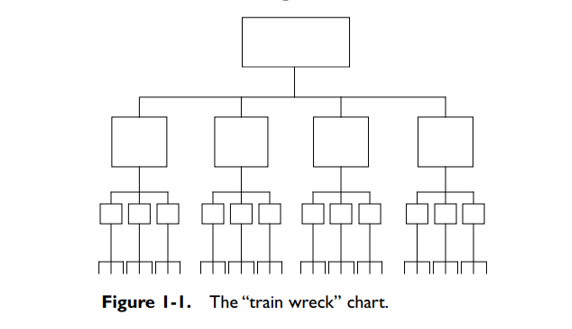 A fundamental premise of the “train-wreck” approach to management is that the primary cause of problems is “dereliction of duty.”  The purpose of the organisational chart is to sufficiently specify those duties so that management can quickly assign blame, should another accident occur.

The era of management that began in the mid-1800s can be characterized as “management by results” (Joiner and Scholtes, 1985).  Since managers could no longer do the work themselves or direct others in the doing of the work, managers exercised their authority by holding people accountable for results.

This train-wreck model evolved in the United States over the years after 1840.  In the 1950s, management by results reached its epitome in MBO (management by objectives) and performance appraisal - the Harvardisation of train-wreck management (Scholtes, 1998).

Command and control worked just fine after World War II. You could not go wrong - no matter what the management method was.  The market was continually expanding while much of the rest of the world was left in devastation from WWII.  Japan lay in ruins from conventional and nuclear war and it was at this time that a well known statistician named W. Edwards Deming was invited to Japan by the Japanese Union of Scientists and Engineers (JUSE) to help them rebuild.  They wanted a new style of management - their products were known as cheap and worth the price but the Japanese felt that nothing would change their poor reputation worldwide.

Deming taught them a new style of management, based on improving quality and creating a culture where everyone would work together as a system.  It was the opposite of the train wreck. Deming assured them that if they listened, then they would take their place alongside prosperous nations within 5 years. They beat it and did it in 4 years!  America and other countries were now screaming for protection! 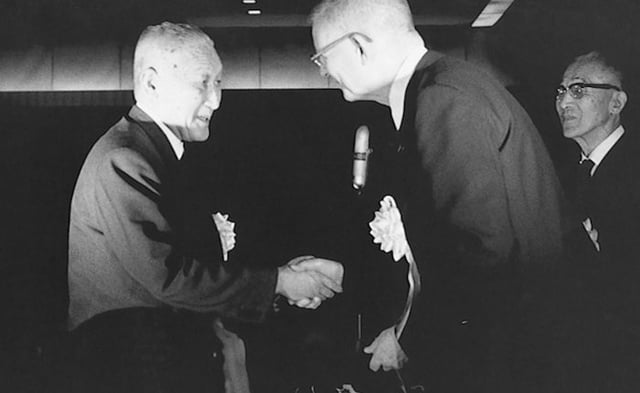 Production Viewed as a System chart

The chart above was known as Production Viewed as a System. It was on every blackboard in Japan when Deming was teaching from 1950 to 1955.

It joined people, management, customers, and suppliers together for the first time working towards a common aim: Everyone winning through improvement of quality.

In Deming's quality system, The customer is the most important part of production.  Customers are asked what they like and don’t like and non-customers are asked why they didn’t buy the product or service.  Suppliers and producers would work together and use SPC to improve constantly by reducing variation.

Japan kept taking over markets over the next three decades and American management did not know what hit them until a documentary aired in 1980 called If Japan Can Why Can’t We? It featured a 79-year-old Dr. W. Edwards Deming talking about what Japan had done and what the rest of the world needed to do for quality, productivity, and competitive position.

Overnight Dr. Deming became a star and Ford, General Motors, The US NAVY, and many more large organisations hired him to help them.

He wrote Out of the Crisis in 1982 as a textbook to help people pull away from the current style of management.  It featured Deming's 14 Points for transformation of management and deadly diseases of Western management.  Many points seemed to be crazy at the time, such as elimination of annual appraisals of people and eliminating grades in school.  To many, these ideas are still radical today. In short, the book destroyed everything people previously believed about management. It was as different as going from a flat earth to a round one (Deming, 1982).

At age 93, Dr. Deming, still teaching and learning, published his final text, The New Economics for Industry, Government, and Education.  Here he unveiled his System of Profound Knowledge, which is the underlying theory behind his earlier 14 Points.  It teaches some knowledge about systems, variation, psychology, and a theory of knowledge. The four fields of thought interact and cannot be separated - It gives a person a new lens with which to view organisations.

A person does not have to be an expert to understand and apply these principles.  This complete theory of management facilitates teamwork and nourishes innovation.

The preface of The New Economics calls for us to abandon train wreck (silo management) and embrace a new philosophy for change:

“This book is for people living under the tyranny of the prevailing style of management. The huge, long range losses caused by this style of management have led us into decline. Most people imagine that the present style of management has always existed and is a fixture. Actually, it is a modern invention---a prison created by the way in which people interact. We have grown up in a climate of competition between people, teams, departments, divisions, pupils, schools, universities. We have been taught by economists that competition will solve our problems. Actually, competition, we see now is destructive. It would be better if everyone would work together as a system, with the aim for everybody to win. What we need is cooperation and transformation to a new style of management (Deming, 1993).”

In the third grade, nearly 50 years ago, our teacher played a word association game with the class. She called out a random word, and we were to very quickly, write down the first word that popped into our minds. I only remember one word and one response of my own, which went like this:

The teacher collected our papers and seemed to be enjoying our responses until she came upon the word 'prison' in response to 'school'. That must have been quite a slap to her face! She became visibly upset, almost to the point of tears and she could not understand why her student said such a horrible thing. Thankfully, responses were anonymous to encourage the truth!  Every school I have attended and every job has been similar to a prison at times. This is but one example of how I have confirmed Dr. Deming’s theory of transformation:

“The first step is transformation of the individual. This transformation is discontinuous. It comes from understanding of the system of profound knowledge. The individual, transformed, will perceive new meaning to his life, to events, to numbers, to interactions between people.”

Once the individual understands the system of profound knowledge, he will apply its principles in every kind of relationship with other people. He will have a basis for judgment of his own decisions and for transformation of the organisations that he belongs to. The individual, once transformed, will:

Dr. Deming’s work, in large part, came from his association with Walter A. Shewhart. Deming and Shewhart acknowledged an everlasting debt to American pragmatist and Harvard educator Clarence Irving Lewis and his landmark book Mind and the World Order: Outline of a Theory of Knowledge.

If you want to know more about improving your business processes, please have a read of Triaster's comprehensive continuous improvement guide.

Shewhart, W. A., & Deming, W. E. (1939). Statistical method: From the viewpoint of quality control. Washington: The Department of Agriculture.

How to Create a Successful Business Process Improvement Model

Why Your Process Improvement Project Plan is Failing

Allen Scott is skilled in all phases of manufacturing and retail continual improvement, with a passion for quality management, in particular, the System of Profound Knowledge of Dr. W. Edwards Deming.